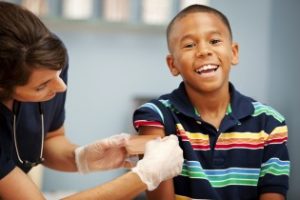 Parents, get ready to roll up some sleeves for this year’s flu vaccination. Health officials are not recommending the nasal spray flu vaccine for children.

Instead, all children ages 6 months and older should receive a seasonal flu shot for the 2016-17 season, according to the American Academy of Pediatrics.

Federal researchers say the nasal spray vaccine effectiveness was about 3 percent during last year’s flu season. The injected vaccine was 63 percent effective for children ages 2 to 17.

“New research shows that the flu shot provided significantly better protection in recent flu seasons compared with the nasal spray vaccine,” said Dr. Henry H. Bernstein, DO, MHCM, FAAP, in a news release from the AAP. “We want to provide children with the best protection possible against flu, and these recent studies show the flu shot is likely to provide a higher level of protection.”

The news is likely to affect many families. Data suggest that nasal spray flu vaccine accounts for one-third of all flu vaccines given to children, according to the Centers for Disease Control and Prevention.

Health officials aren’t sure why the nasal spray, which contains a live virus, performed so poorly last year. Vaccines containing live viruses can cause a stronger immune response than vaccines with inactivated virus, according to the CDC.

Everyone who is 6 months or older should get a flu vaccine ideally by the end of October. Between 3,000 and 49,000 people die every year in the United States after becoming seriously ill from seasonal flu.

People who are considered high risk can lower their chances of severe flu illness by getting vaccinated. This includes: young children, pregnant women, people over the age of 65 and anyone with chronic health conditions such as asthma, diabetes, heart disease or lung disease.

Children younger than 6 months are too young to be vaccinated but are at high risk of serious flu illness. Anyone caring for infants should be vaccinated, according to the CDC.

Women who are pregnant or breastfeeding are also encouraged to be vaccinated. Women can safely receive the influenza vaccine at any point during pregnancy, and are of special concern because of the high risk of complications from flu. Their vaccination also provides protection for their infants during the first six months of life through a transplacental transfer of antibodies, according to the AAP.

“Pregnant women can help protect themselves and their unborn children by getting the vaccine,” said Dr. Wendy Sue Swanson, MD, MBE, FAAP, in the AAP news release. “Breastfeeding also offers newborns added protection against the flu. Because the flu virus is common and unpredictable, it can cause serious complications even in healthy children.”