Pap Smears, HPV, and Your Health 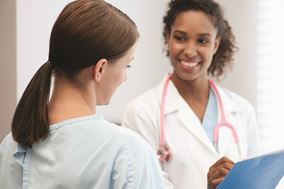 Human papillomavirus (HPV) is a small DNA virus that is the most common sexually-transmitted infection in the United States.  Not only is it the cause of genital warts, but it is responsible for over 99% of cervical cancer.  It has also been linked to vaginal, vulvar, penile, anal, and oropharyngeal (neck, tongue, and throat) cancer.  In fact, as tobacco use in the US goes down, HPV has become the greatest cause of oropharyngeal cancer, especially in men.  Research on HPV as a causative agent for disease is ongoing, with HPV being postulated to be involved in such things as heart disease, eye cancer, and lung cancer, though no high quality studies have been completed to confirm any of these links.  There are over 200 types of HPV, of which approximately 14 are known to cause cancer.  Of these, types 16, 18 and 45 account for 80% of invasive cervical cancers.  The majority of HPV infections are asymptomatic, and most are cleared by the body without any problems.   It has been estimated that 80% of the population will have an HPV infection at some point in their lifetime.

Pap testing is a screening test for cervical cancer.  The pap smear was developed by Dr. George Papanicolaou in the 1940s, and was in routine use by the 1950s. This testing has been a public health success story, reducing the new cases of cervical cancer, once the number one cause of cancer death in women, by over 60% in the United States.  Starting in 2003, HPV DNA testing has been available.  Initially used for triage of indeterminate pap tests, the current guidelines allow for co-testing with traditional pap screening.  Over the past 10 to 15 years, pap testing guidelines have evolved greatly.  Initial yearly testing, which was an arbitrarily chosen interval, was replaced when 3-year testing was shown to be equivalently effective.  This is due to the fact that most HPV changes end up being transient and resolve spontaneously when the immune system discovers them.  Thus many abnormalities in pap smears would resolve spontaneously without treatment.  With the increased power of HPV testing, the guidelines were then changed again, as co-testing has been shown to be an even more powerful screening test.

Current guidelines state that pap testing should begin at the age of 21.  If this pap shows no pathologic change, then testing is repeated every 3 years.  After age 30, co-testing (with pap and HPV testing) can be done every 5 years.  At age 65, consideration can be given to stopping pap testing, based on history.  Strong consideration can also be given to stopping pap testing after hysterectomy.  Many women are very concerned about increasing the interval from yearly screening; it seems to be ingrained into people’s minds that they MUST have a pap smear every year.  The new screening guidelines have outcomes that are as good as or better than older guidelines in rates of preventing invasive cancer and cancer death.  They have many other advantages including a) greater convenience in terms of less frequent screening, b) the avoidance of unnecessary colposcopies (the next step in screening which can be painful, cause a great deal of anxiety and worry, and carries a slight increase in risk of preterm delivery for subsequent pregnancy), and c) greater cost effectiveness (since we are, as a country, looking to spend health care dollars as wisely as possible).  An added bonus is that it allows providers to focus on other aspects of women’s healthcare during the annual visit, which is still strongly recommended.  The specialty of Obstetrics and Gynecology has many facets other than cancer screening.  Rather than focusing on yearly pap testing, this allows the annual visit to encompass other aspects of Women’s Health such as family planning and reproductive issues, menopausal management, gynecologic care, and general wellness.

Finally, here is a quick comment on HPV vaccination.  Cancer is a diagnosis that we as doctors hate to have to give and that most patients fear greatly.  HPV vaccination goes a step beyond treatment and cure… it is a means of PREVENTING cancer.  The current vaccine works against 9 types of HPV, 2 of which cause genital warts and 7 of which are the leading causes of cervical cancer.   Studies in Australia, where the vaccine is mandated for children, have shown a rapid decrease in the rates of genital warts.  Extrapolating from this data, we should expect to see a dramatic decrease in cervical cancer as well, once this vaccinated generation reaches the age when cervical cancer is more common.  Every year in the United States, approximately 30,700 cases of cancer are caused by HPV; vaccination could prevent over 28,000 of them.  The vaccine is given in 2-3 doses, depending on the age of initial vaccination, and has been shown to be safe through repeated studies.  It is recommended for both boys and girls, starting around age 11 and to be completed before age 22 in young men and 27 in young women.  Patients outside of the age range of the guidelines may still benefit and should consult with their physician regarding vaccination.