Millions of Older Americans Not Getting Enough Exercise 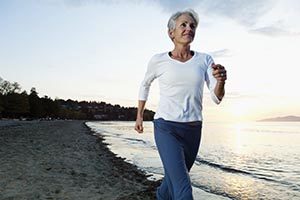 More than 25 percent of Americans who are 50 or older do not exercise regularly and are physically inactive, according to a new federal health report. As a result, millions of people are missing out on many health-related benefits linked to staying active.

Not only can physical activity reduce the risk of premature death, but it also can delay or prevent many chronic diseases, including: heart disease, type 2 diabetes, dementia and some cancers. As adults grow older, they are more likely to be living with a chronic disease and these diseases are major drivers of sickness and disability, according to the Centers for Disease Control and Prevention.

“Adults benefit from any amount of physical activity,” said Janet E. Fulton, Ph.D., chief of the Physical Activity and Health Branch at the CDC and an author of the new report. “Helping inactive people become more physically active is an important step towards healthier and more vibrant communities.”

Researchers analyzed 2014 data from all 50 states and the District of Columbia. A person was considered inactive if the only physical activity they had during the day was from basic movements during daily life activities.

According to the data, women were slightly more likely to be inactive than men. As women and men aged, they were both less likely to be active. More than 35 percent of adults 75 and older were inactive. Roughly 31 million Americans over the age of 50 are physically inactive.

The report comes at a time when health authorities nationwide are concerned about the growing number of children and adults who are overweight or obese, which can lead to several health problems. Federal guidelines for exercising recommend all adults get 150 minutes of moderate-intensity aerobic activity every week.

People who cannot exercise that much over the course of a week should do what they can as their abilities or health conditions permit.

If more people exercised, federal health officials argue that health care costs could decrease as people get healthier. Eighty percent of the most costly chronic conditions among adults 50 and older can be prevented or managed with physical activity, according to the CDC.

Benefits of regular physical activity for people over 50 include:

“This report helps us better understand and address differences in inactivity among adults 50 years and older,” said Kathleen B. Watson, Ph.D., an epidemiologist in CDC’s Division of Nutrition, Physical Activity, and Obesity and lead author of the report. “More work is needed to make it safer and easier for people of all ages and abilities to be physically active in their communities.”

Learn about physical therapy programs for people with arthritis on the Bon Secours Physical Therapy website.