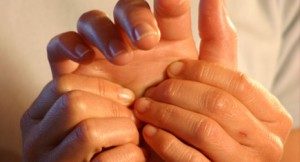 Nearly half of all work-related injuries are linked to carpal tunnel syndrome. Repetitive movements – such as typing on the computer – can cause pain, numbness and weakness in the wrist and hand.

Here’s the good news: physical therapy to treat carpal tunnel syndrome may be just as effective as surgery, according to a study published in the Journal of Orthopaedic & Sports Physical Therapy.

Although surgery may be considered when the symptoms are severe, more than a third of patients do not return to work within eight weeks after an operation for carpal tunnel syndrome, according to a news release from JOSPT.

The study demonstrates that physical therapy–and particularly a combination of manual therapy of the neck and median nerve and stretching exercises–may be preferable to surgery, certainly as a starting point for treatment.

“Conservative treatment may be an intervention option for patients with carpal tunnel syndrome as a first line of management prior to or instead of surgery,” says lead author César Fernández de las Peñas, PT, PhD, DMSc, with the Department of Physical Therapy, Occupational Therapy, Rehabilitation, and Physical Medicine at Universidad Rey Juan Carlos, Alcorcón, Spain.

The researchers conclude that physical therapy and surgery for carpal tunnel syndrome yield similar benefits one year after treatment. No improvements in cervical range of motion were observed in either patient group.

Bon Secours Physical Therapy program helps people with many other hand and wrist issues including: sports injuries, fractures, and arthritis as well as carpal tunnel syndrome. Our team is not limited to hand problems, however. For a full overview of our services, please visit us at www.bonsecoursphysicaltherapy.com.