Protect Your Newborn from the Flu: Get Vaccinated 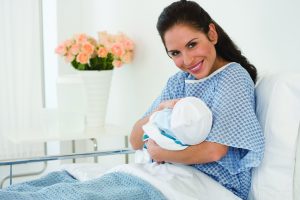 Women who are pregnant or thinking about becoming pregnant, should talk to their doctor about getting a flu shot. A flu shot not only helps protect a woman from getting influenza during pregnancy, it also provides important protection for her newborn.

Pregnant women can get vaccinated for the flu during any trimester of their pregnancy, according to the American Congress of Obstetricians and Gynecologists and the federal Centers for Disease Control and Prevention. Multiple published studies, as well as clinical experience, support the belief that the flu vaccine is safe and effective during pregnancy, according to ACOG.

Many people die from flu complications every year. Pregnant women are particularly vulnerable to serious illness from the flu because of changes that occur during pregnancy to their immune system, heart, and lungs.

Not only does the flu shot protect a pregnant woman, it also helps protect her baby from influenza. Antibodies from a mother pass during pregnancy to her developing baby, providing protection that can last the first several months of life.

According to the CDC, the most common side effects experienced by pregnant women are the same as those for other people. The following possible symptoms are generally mild and last only one to two days:

Although some people may be concerned about a recent study that showed women in early pregnancy who received two consecutive annual flu shots during 2010-11 and 2011-12 had an increased risk of miscarriage in the 28 days after receiving the second vaccine, health authorities say there isn’t enough evidence to change their flu recommendations for pregnant women.

The study is questionable based on its small size and other factors, health officials say. For example, it’s possible that the miscarriages had nothing to do with getting vaccinated for the flu. In addition, the study does not quantify the risk of miscarriage and does not prove that flu vaccine was the cause of miscarriage, according to a statement from ACOG.

“ACOG continues to recommend that all women receive the influenza vaccine,” the statement reads. “This is particularly important during pregnancy. Influenza vaccination is an essential element of prenatal care because pregnant women are at an increased risk of serious illness and mortality due to influenza. In addition, maternal vaccination is the most effective strategy to protect newborns because the vaccine is not approved for use in infants younger than six months.”

Women who have concerns or questions about receiving flu vaccine should talk to their health provider.